This briefly explains all the report components from the simulations in securiCAD Enterprise.

The Report overview shows you a high-level view of your risk posture and highlights from the report. The first section gives you a short summary of the sections below in the report. 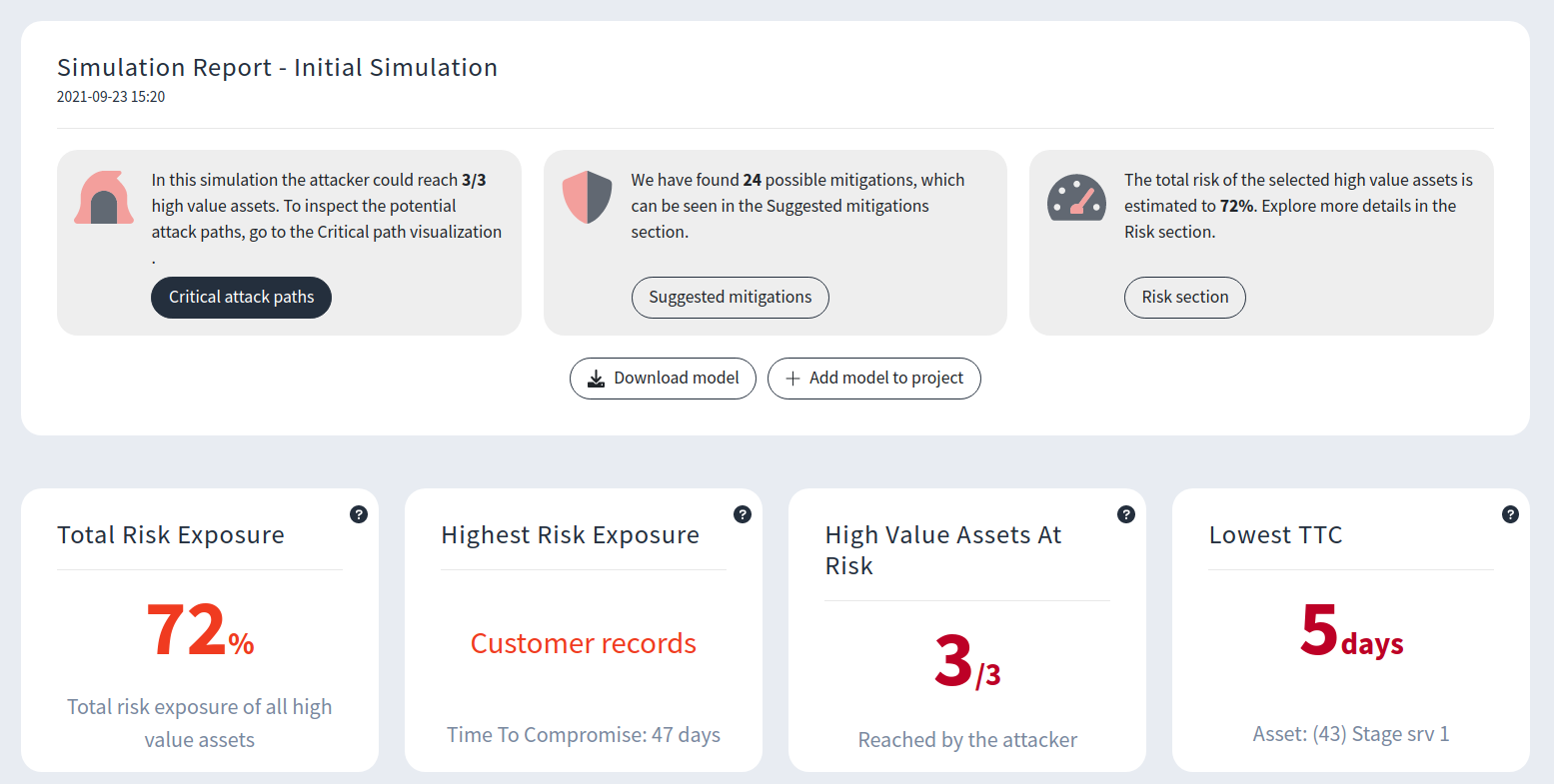 The critical paths show the different attack steps an attacker (red node to the left) is expected to use to reach the high value asset (blue node to the right).
The first path we see is the most likely attack path. Every node is an attack step and the arrows in between them shows in what order they are reached. Multiple paths to the same node indicate that the attacker has to reach multiple attack steps to be able to succeed with the next one or that there are multiple equal paths available.

In the top toolbar there is an option to increase the Detail level to show additional alternate paths. These additional paths are other possible paths that the attacker succeeds with but requires more effort and are therefore less likely. 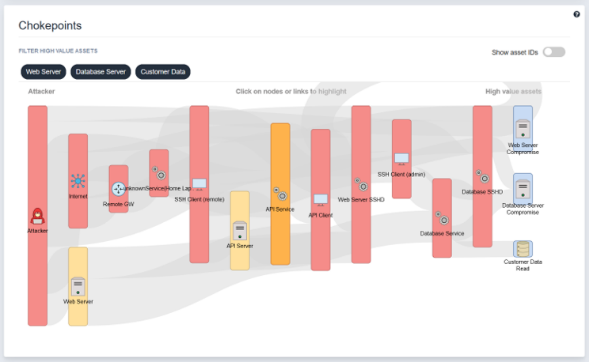 Confidentiality Risk denotes the total percentage of expected loss of confidentiality on all assets with consequences set on them. The value is calculated by summarizing the probability of success of an attacker reaching attack steps that affects confidentiality.

Integrity Risk denotes the total percentage of expected loss of integrity on all assets with consequences set on them. The value is calculated by summarizing the probability of success of an attacker reaching attack steps that affects integrity.

Availability Risk denotes the total percentage of expected loss of availability on all assets with consequences set on them. The value is calculated by summarizing the probability of success of an attacker reaching attack steps that affects availability.

The Risk Matrix is a matrix that is used during risk assessment to define the various levels of risk of attacks. On the vertical axis, we have the probability for the attack to succeed within a given number of days. On the horizontal axis, we have the consequence estimates between 0 and 10. 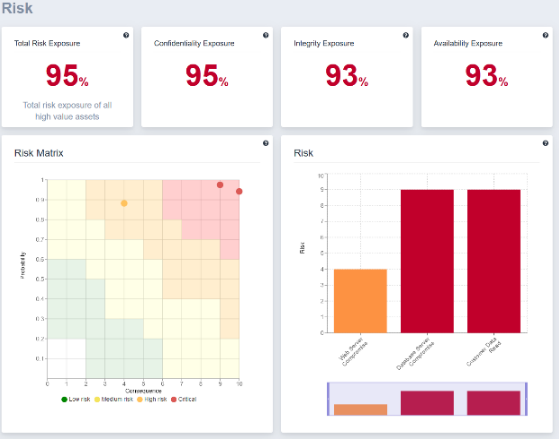 The Threat Summary is a summary of threats and actions performed by the attacker to reach the high value assets during the simulation.

General description of the threat or action performed.

Information about potential mitigations that can be applied to reduce or prevent the threat. Some threats will not have applicable mitigations as they are natural consequences of other threats or legitimate actions.

Threats and actions performed by the attacker are mapped to taxonomies and frameworks such as STRIDE and MITRE ATT&CK where its applicable.

Shows the trace information to the current threat. Trace data comes in two forms: cause and effect.
For example, a permission, policy or firewall rule might be the cause of an threat and the ability to perform an action could be an effect of the threat.

A list security controls you can apply in order to prevent the threat. This is not applicable to all threats. 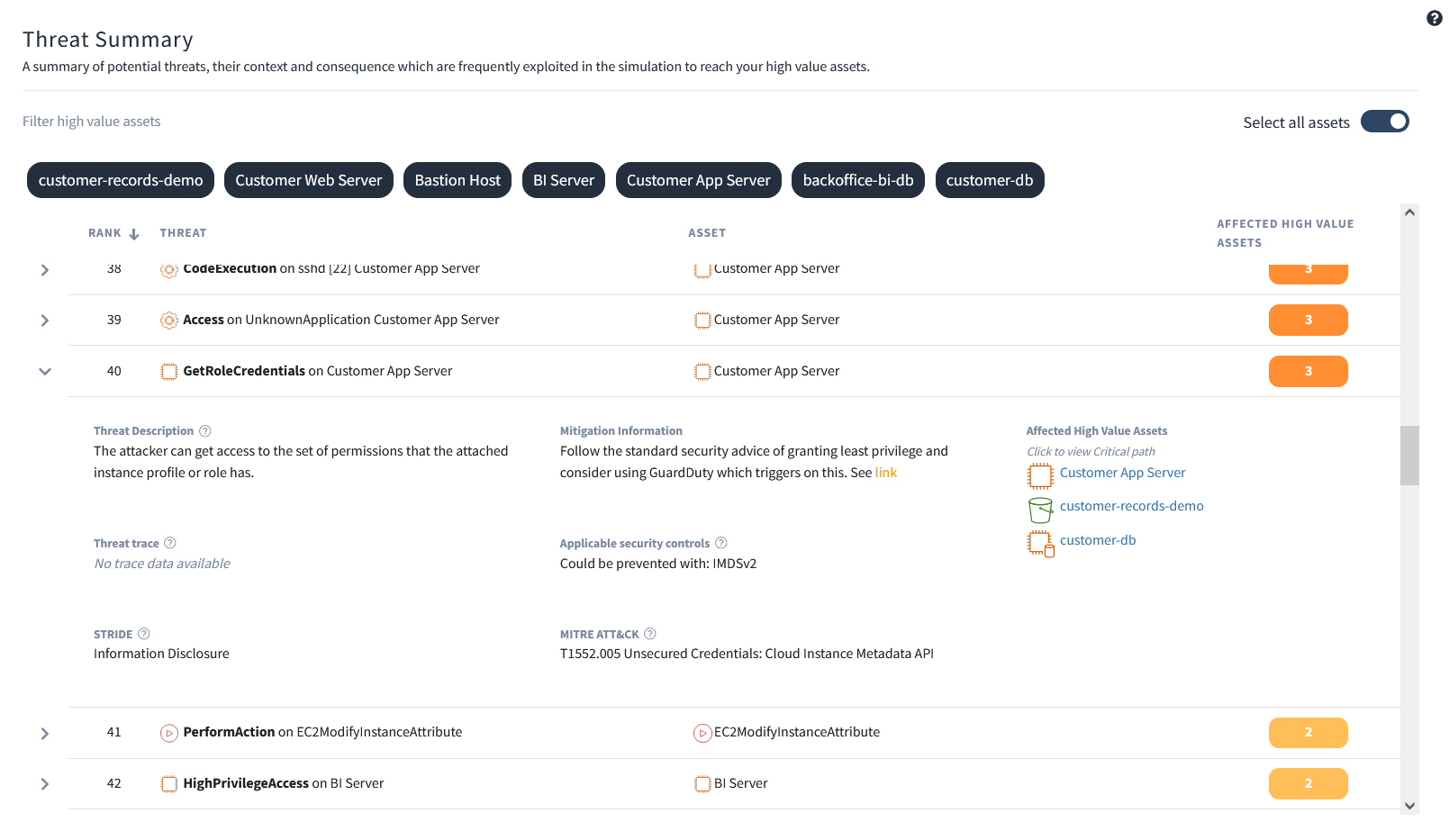 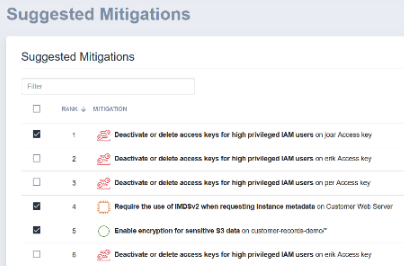 Missing security controls is similar to suggested mitigations but includes mitigations that cannot be directly applied as they include adding objects to the model.